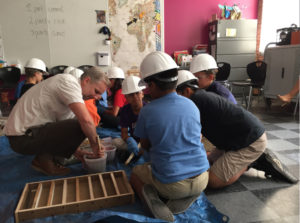 6th graders at Urban Discovery Academy in San Diego had the pleasure of learning about a few basics in construction from Soltek’s Design-Build Program Manager, Chris Sullivan. Chris taught the class about building structure including concrete, wood, and steel. To demonstrate the effects of compression and tension on steel, two students grabbed opposite sides of a clothes hanger and pulled the hanger apart, simulating tension. When the students pushed the hanger back together they learned about the poor compression ability of steel. Chris set up four Jenga towers and placed a piece of plywood on top to explain dead load and lived load. A student was selected to stand on top of the plywood to act as the live load while the plywood itself acted as the dead load. Much to the student’s excitement, Chris selected someone to ‘be an earthquake” by kicking the Jenga towers and knocking the student down from the plywood. The lesson was that concrete reinforced with steel is the best building structure for earthquake prone areas. 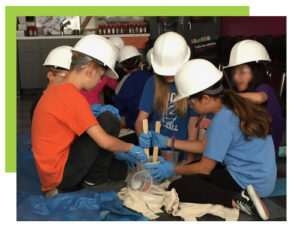 The 6th graders were eager for some hands-on learning so Chris had the students mix concrete. The students were split into four groups and each group appointed a Project Manager responsible for making sure the ratio of concrete ingredients was correct. The students donned hard hats, safety goggles and gloves and mixed the ratio of cement, water, and sand into buckets. Chris taught the students about the ideal color and consistency of concrete. Once the concrete was completely mixed, the groups poured their buckets into a wood form. One of the groups added fiberglass to the mix, another added extra cement, another was a control of just concrete and another was poured into a section of the wood form that contained a piece of rebar. In another lesson, the students will watch as the different types of concrete are attempted to be smashed, hopefully learning that the concrete reinforced with rebar is the strongest. Some students were preoccupied with blowing up their rubber gloves to make balloons, others were extremely interested in getting the perfect ratio and consistency of the concrete. Perhaps a simple lesson in building structure and concrete will inspire the next generation of engineers and builders.